October is Breast Cancer Awareness Month and thanks to Angelina Jolie’s very public announcement that she’d had both breasts removed due to her increased risk of breast cancer, many of us are much more aware of the need for regular mammograms and self-checks. But what exactly causes breast cancer, and what is that BRCA gene we’ve heard so much about?

The mutated BRCA gene is inherited, making a family history of breast cancer a red flag. But there are a couple of other causes being studied, one of which is the relationship between estrogen and breast cancer. WebMd’s article http://www.webmd.com/breast-cancer/guide/what-causes-breast-cancer suggests that the effect estrogen has on the development of breast cancer is becoming more clear. Estrogen tells cells to divide, and the more cell division going on, the more chance of an abnormality becoming cancerous. Because a rise and fall of estrogen is a natural part of menstruation, this risk of cancerous cells occurring as a result of cell division may increase due to a few occurrences:

The article states that birth control pills and the radiation level involved in mammography are not believed to be risk factors, and the effect of HRT is still being debated.

Another cause being studied, according to the WebMd article, is diet. Studies have linked obesity, regular alcohol consumption (more than 1 drink a day), and diets high in fat to breast cancer.

One more link is being studied – the environmental/chemical link. In an article on the Environment Defense Fund’s website (www.edf.org) the author Sarah Vogel, director of Environmental Defense Fund’s Health program, references a report published by the Inter-agency Breast Cancer and Environment Research Coordinating Committee (IBCERCC). This report recommends that more attention be paid to the effects of chemicals with estrogen-like characteristics, on developing breasts.

According to the CDC, breast cancer is the most common cancer among women (123 cases/100,000 women in the U.S.), and the second leading cause of cancer related death among women (first among Hispanic women). While a family history is still considered the primary risk factor, a lack of it should not create a (false) feeling of security. October is Breast Cancer Awareness Month. Be aware of your breasts and make an appointment for a mammogram. The ta-tas will thank you.

Breast Cancer and the Importance of Mammograms 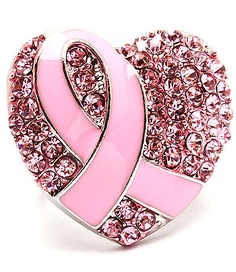